Once went under the alias of iDifficult, until the tax man caught up with him.

Indigo Roth
The name is Roth, Indigo Roth. He wears a suit a lot. Sneaks into these stories from http://www.indigoroth.com

She is straight forward, honest and trusting to a fault - which would be why she is often left black faced holding the dynamite stick, but she doesn't really mind because she enjoys a good challenge and consistently believes the next time she will get the upper hand.

The Waiter with No Name
Runs The Euthanasia Curry House. Knows exactly when a curry is needed, no matter where or when. Always dressed for the occasion.

Death
Appears with unfailing regularity here. The other horsemen of the apocalypse haven't had a look in - clearly their horses are slower. He never goes by his real name.

Mulder and Scully
Two cats who occupy the fence at the bottom of my garden in Slobbering-under-the-Bed. Mulder has been abducted by aliens. Scully has some doubts.

Off-his-Head-Man and Blotto-Boy
Slobbering-under-the-Bed's very own super heroes. Come to the rescue when ever something like beer needs to be drunk.

It likes 80's music and disco. 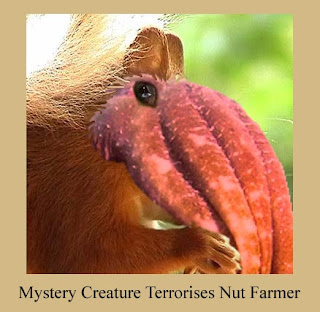