Time is the Simplest Thing 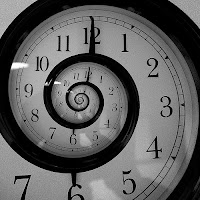 I was explaining, with plenty of hand gestures and unnecessary arm waving.

"There are three dimensions of space, and one of time. It's a bit odd, 'cos the time one keeps on marching onwards. If it were left and right, it'd be like us all continuously moving a bit to the left all the time."

"So you worked out how to travel through time?"

"Oh, everybody can do that! One second at a time into the future. Just staying still is hard. Master that and you've got the rest cracked."

"So how does this work then?" He pointed to the polished brass, glass and dark wooden contraption, glinting in the sunlight of a new day.

"It doesn't. I made that because that is how a time machine is supposed to look. There's no swirling vortex, lightening or a howling gale. Always liked the Time Tunnel or Terminator idea. You even get to travel clothed."

"That's not what you told me when we travelled to Ancient Egypt!"

"Hmm, sorry about that. I was trying to compute your gullibility quotient. It's amazingly high. I digress. The trouble is, you don't see or feel anything," I paused, "Actually, that's not quite true. Everyone feels a little sick going backwards."

"So where is the time machine?"

"Third draw down in the wooden dashboard."

"Third. Cheese and fruit cake in the top drawer. Coffee machine in the second. Got to get your priorities right."

"So anyway, you were saying, three dimensions of space, and one of time."

"Yes, thank you," I hadn't waved my arms unnecessarily for several minutes, "Do you remember my favourite technique for playing a really strong chess computer? Play as well as you can, but when it gets a really good lead over and the game is all but lost, swap sides with it."

I carried on, "What if we swapped time for left and right, or time for up and down, or even with back and forwards?"

"Yes, although the first experiment didn't go well, and I swapped left and right for up and down. When it swapped back I had my left elbow in my right ear."

"Then you got it right."

"Indeed but only after I got fed up with getting ear-wax on my elbows. I swapped and found by walking sharply backwards and then putting time back where it belongs I had gone back to last week."

"Left it on last night. It'd swapped up and down with time. When I woke I was 15 feet above the top of the house but hadn't aged a second," I thought about this for a moment, "until I woke up."

"Did you fancy having that curry from last week again?"

"Yes, but if we wait until we order and then appear one bay closer to the kitchen they'll serve us the food and won't notice our past selves sitting in the next bay down."

"You know, I don't remember last weeks curry being any good. Ordered, waited for ages, didn't get any food and then they presented a huge bill."

"Yeah, must have done, let's go..."
6 comments:
Email ThisBlogThis!Share to TwitterShare to FacebookShare to Pinterest

The report of my death was an exaggeration

"You do look a bit pale though. Are you sure you're not dead?"

"Sometimes you've got a take a bit of a rest, even from things you enjoy."

"My new aftershave. It was a present. Do you like it?"

"Good plan. We must have a curry. Anyway before you go, could you do something for me?"

"Could you close the lid? Ta. I need a lie-in."
6 comments:
Email ThisBlogThis!Share to TwitterShare to FacebookShare to Pinterest 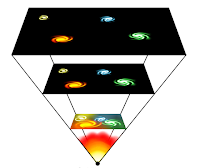 "Have you been out this far before?", my friend asks.

"No, although I did go right to the other end. It looks surprisingly similar."

"Black, very very black. But yet with a single point of light in the distance."

I nodded agreement and we both heaved that admiring nature sigh. He sipped his Vesper, and I my Advocaat, Coke and Drambuie cocktail. My eyes watered slightly. I was sure the olives weren't doing it any favours.

"What are we breathing?"

"Third oxygen, two-thirds nitrogen, bit of CO2 and few other gasses. And I'm fairly sure I just swallowed a fly."

"That's air! I thought you said there wasn't any?"

"None, generally. There is inside this bubble. Don't know quite why. I suspect we brought it with us, along with the two comfy chairs and the cocktails."

"So what's the bubble made of?", he said poking it with an outstretched finger. It vibrated. He poked it again. It had that seductiveness of bubble wrap.

"I think it's curdled time," I scratched my chin and thought about it, "You know it takes huge amount of power to do that?"

"Where did the power come from?"

"Well, next week when your electricity bill drops through your letter box."

"Don't even think about opening it."
7 comments:
Email ThisBlogThis!Share to TwitterShare to FacebookShare to Pinterest

Poking Time with a Stick

It was a pleasant afternoon sitting in the shade leaning against the wall of an old dusty building. It was a very long time ago, in a land that has had many names, and supported many civilisations with as many languages. You'd probably recognise it best as Iraq. 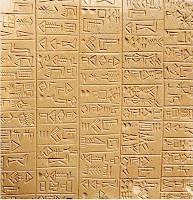 I was writing in a clay tablet with a stylus. It was careful and painstaking work. I was really missing the spelling checker, but less so the grammar checker and automatic humour inserter, but anyhow these wouldn't have been invented until some 50 centuries later.

Once I'd finished writing, my old friend Indigo Roth would pop the tablet into an oven and give it a good baking. I'd just finished one, he'd put it into the oven and, in return, got a freshly baked one out and laid it gently into the sand where he read it. When he'd finished, he smacked a corner off the tablet with a rock and proceeded to pound the bit he'd broken off into the dust.

"If you don't like what I'm writing, you could just tell me," I said, with my spare stylus in my mouth. It made grinning difficult.

"Nothing wrong with it at all. It's just it started to make sense. It's much better with the corner removed."

"Yes, yes, you're right. If it makes sense we'll loose the whole point of the day."

The day had started ordinarily enough. Roth had banged on the door of my shed. Then the other one. Then finally the shed I was actually in. Feet resting on piles of books, laying back in battered old armchairs we sat and chewed the cud and some of Roth's most excellent coffee. He'd been boiling this batch since last Monday week.

"Nope, never happened to me."

"From a pedant. Of the worst kind. He said I had broken a grammar rule in my entry."

He went on to explain the rule of past participle post wrangling. He did much gesticulating. I chewed coffee.

Then we got serious. The time machine crackled into life. Fortunately it does allow some travel in space as well as time, or it'd be one hell of a long walk at the other end. Or we'd have to get the time machine onto a plane as hand luggage, and you know how fussy they are about things with wires and particle accelerators. Any excuse and they'd think we were terrorists.

Clutching the clay tablets under our arms we went into the local library and carefully arranged the tablets on the recently returned tablets shelf. The Sumerian lending library service was fantastic and the fines were very reasonable for late returns.

"That'll teach the pedant. No more past participle post wrangling," said Roth, grinning widely, "and the Squiddrel will be in ancient mythology."

"Do you think your coffee will have set completely, or can we have a cup when we get back?"
8 comments:
Email ThisBlogThis!Share to TwitterShare to FacebookShare to Pinterest 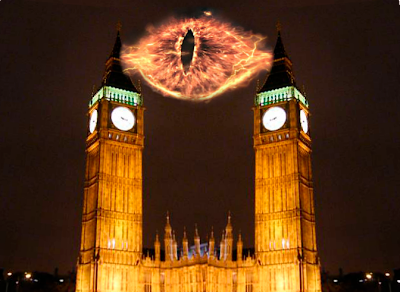 A spokesman for the new coalition was reported as saying that "they wanted a symbol to represent the new age of austerity and, indeed, fear we should all feel unless we happened to have inherited large amounts of money and have been to the 'right' schools."
7 comments:
Email ThisBlogThis!Share to TwitterShare to FacebookShare to Pinterest
Newer Posts Older Posts Home
Subscribe to: Posts (Atom)