As recounted by Indigo Roth in a wonderful Lemsip fueled haze called Making a break for Venezuela, we shared an interesting few years at the same school.

The school was typical for it's era and location. Wood panelled, ancient, dimly lit, and with masters that looked like they had fought in both World Wars. On the wrong side.

At the end of each year there was a test. Unlike today where this involves individual desks, a piece of paper and a sharpie, tests in our school had a more practical nature. This has been so since the year a master gave Roth a pencil and turned his back.

Roth, myself and Bernard Drentwistle, the principle boy, were chosen for this particular test. We were taken from our normal classes and ushered down the wood panelled corridors to an area of the school I believe none of us had seen before. The floor was dusty and we left fresh footprints. Ultimately we arrived at a corridor with three white doors cut into the wood panelling.

The masters moved as, none too gently I seem to remember, in front of a door each. This close I could see the door was absolutely perfect. Not a blemish. Nor a handle.

The doors hissed open in front of us and we each were ushered into the room beyond. And what a room it was. It was perfectly cubic. The walls, ceiling and floor were brilliant white. It was hard to work out where the light was coming from but it was bright, almost painfully bright.

"You have one hour," said the master, in tones that would have made Death give up his job as a voice over artist. The door shut behind me. Perfectly. So perfectly there was no line around the edge of the door that could be seen. If I rubbed my nail across where the join should be I could just perceive a faint click.

The room was empty, so very empty. Except for two 12 inch diameter stainless steel spheres. I walked over and attempted to pick one up. It was absolutely solid and heavy as lead. This could be an interesting hour I thought. 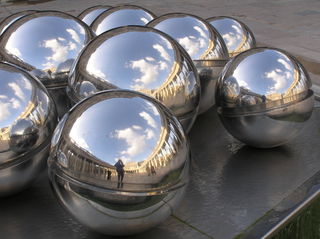 Some weeks past, during which time Roth and I amused ourselves in biochemistry lessons by making the lunchtime custard sentient. In physics we were successful in electrostatically levitating our physics master up to the lab ceiling, until he had this misfortune of touching the metalwork of one of the light fittings. Brightest flash I've ever seen.

And we managed to restore the library building to it's former position although the selection of pre-historic predators in the reading room was not truly appreciated as the educational aids we had intended. As Roth said, "You try to help some people."

It was a November assembly when we got the results of the test. The headmaster was walking from his office to the lectern whilst the music master played "The Death March" on his piano.

The headmaster cleared his throat and projected, "I'd like to read out the results of our end of year tests." He proceeded to describe the test we had undergone, "Three identical clean, cubic rooms, three pupils, six solid steel balls, two in each room. No communication and one hour to work."

"In first place, Bernard Drentwistle, did extraordinarily well. When we returned to the room he had got one ball balanced on top of the other. Clever chap indeed."

"In second place, by a huge margin, is Indigo Roth. When we returned to the room he had his head on one ball, his feet on the other and was fast asleep. There was a pizza box next to him. We aren't sure how he managed to order a take-away."

"In last place, and banned from ever taking the test again, is Mr Difficult. When we returned to his room, he'd lost one and broken the other."

"Would everyone please clap and show their approval for our excellent pupils." Under his breath he was heard to say, "and restrain Mr Difficult NOW!"
5 comments:
Email ThisBlogThis!Share to TwitterShare to FacebookShare to Pinterest
Newer Posts Older Posts Home
Subscribe to: Posts (Atom)