Today was the first day of Autumn, or so it felt. I'm sure there is an official first day, but frankly I don't care. It felt chilly. The trees are changing colour. I love this time of year, Halloween, Guy Fawkes night (fireworks, mulled wine, sausages, jacket potatoes, oh yes indeed). A few years back I took some nice firework photos one Guy Fawkes night. He's one I quite like: 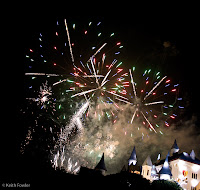 Over in the UK we have a postal strike. I hardly ever send anything by post or depend upon it in any way, so it is, for the most part, as relevant to me as a Blue Hippopotamus strike. Then again we are under three months from Christmas, and like most people I send and receive Christmas Cards.

I still cannot figure out why I celebrate Christmas or send cards. I'm an atheist, but I was brought up in a Christian country (well Church of England which is more about tea with the vicar and village cricket than anything else). My parents were devoutly apathetic - we 'did' Christmas, Easter Sunday, ate hot cross buns and ate pancakes on Shrove Tuesday. We only ever went near a church for the occasional christening, wedding or funeral.

Anyhow, when it comes down to it, what's wrong with a day of the year where all the shops really do close, we pretend to be nice to one another and give presents we received from someone else the year before to relatives we won't see again for another year? If we atheists didn't borrow a festival from the incumbent religion in the area we'd have to invent one. Why shouldn't my child get loads of presents on a day other than her birthday?

So why do I send these stupid cards to people I actually do care about? Cards that have pictures of a winter scene that doesn't usually happen where I live until over a month after Christmas. I can't remember the last time it snowed on Christmas Day anywhere near my home. Alternatively I send cards with 'witty' comments like "Have another mince pie this Christmas, you're already fatter than Santa Claus". Almost all contain a trite, hand scrawled message saying "we must meet up in the new year".

What makes the whole fiasco even more silly is that many of my friends are similarly disposed towards religion as I am, a good number are Muslims and a small number are of other world religions. Should I give them a card because I do genuinely wish them peace, happiness and plum pudding, or not because it is not their way?

This year, I'm thinking quite seriously about creating an electronic card, with a personal picture and greeting for all my friends, and saying to the card companies: "don't chop a tree down for me this year".


Would this be considered green and 21st century or mean and Scrooge-like?
3 comments:
Email ThisBlogThis!Share to TwitterShare to FacebookShare to Pinterest

I love conspiracy theorists. I want to believe they say. Well, Mr Mulder, I am your arch nemesis. Professor Moriarty to your Holmes. The Joker to your Batman. The Roquefort to your Edam.

Indigo Roth (the big purple one) and I had an idea. Like all ideas it was formed over a drink in the pub. "Conspiracy theories are the new religion", I said as I fell off my bar stool. "Quite right", he replied, helping me back onto my stool, deftly adjusting his waistcoat and flicking his tails over the back of his chair in one fluid motion. "So what shall we do about it?", he continued. "Give 'em something to think about?" we both said together.

We sealed our pact with a drink, my yard of ale clicking against his, his, well something-in-a-glass-with-a-brolly-in-it. He never explained what it was, but sometimes it gave out a puff of bluish smoke. Although that may have been the earlier Chicken Phal.

We started small. All good operations start small. We found a front garden of a house in Basingstoke. It had three gnomes. We started moving them around over intervals of several days. Then we added to them. By the time we finished there were over two hundred and fifty-four of them.  Our best evening was arranging them under the owner's jacked up car, like they were changing a wheel. Made the local paper. I believe the gnomes are still running a Kwik-Fit Tyres place.

Since then it has grown, taking most of our waking hours procuring materials, travelling, building strange structures and getting back in time for the day job. Some are arduous, some are just fun. Crop circles are always fun. You can do them when you're completely out of your face on beer and whisky. Just need to find a field with a decent crop.

The statues on Easter Island were Indigo's design. I said they should be more 'smily', he disagreed. He wanted moody and enigmatic. Maybe he was right. Either way it was bloody hard to get them in place with a old Vauxhall Viva Estate and a set of crowbars. We didn't put out the one with the porkpie hat, as that may have blown the game.

There has been laughter and tears during our times. I remember doing the Mysterious Nazca Lines in Peru. Middle of the night, there we were pushing our wheelbarrows around, lining them up on features in the horizon - got to keep the lines straight I said. Mine got a puncture and started going along all flop, flop flop. Indigo hit a llama, which lay on it's back in his wheelbarrow with all four legs in the air. When you look at the photos taken from the air you can see where we got in trouble.

Now the Bermuda Triangle is one I really wish we hadn't started. Such a long way to go. My original plan was to have the triangle between Felixstowe, Amsterdam and Gothenburg like the dreadful 1980's British TV series. We settled on Bermuda as one apex mostly because it had much better hotels. The North Sea Triangle would never have been investigated by anyone who didn't want to get freezing cold, wet and miserable. So Bermuda it was.


Anyhow, time is getting on and I have a really good mock up of Pandora's Box to finish in my shed. The  llama needs feeding too [why my shed Roth? He'd have fitted under your bed perfectly well]. Indigo will be over later with the mysterious metal bits he cast for Roswell next week.

I live in a place where ancient lay-lines cross the well trodden route to KFC. That brings some ancient magic to the fore. Strange things happen here.

Mrs Long-suffering and I would like a dog, but they're a load of effort and responsibility.

Anyhow, back to the cat idea. There is a snag. A wee problemette.

When I was in my teens I had asthma. Quite badly. I had allergy test at a swanky London hospital (thanks to the NHS). They confirmed I was allergic to house dust and CATS.

My parents immediately went out and bought a very hairy Persian cat. Does anyone think they were trying to tell me something?

Mrs Long-suffering explained about Daddy not being able to live with cats because his breathing gets bad. Fluffy daughter nodded sagely. She said she'd still like a cat.

Friday morning Fluffy daughter explained that she could get a cat if daddy went away. She said I could go and live with my mum and dad, 'cos I love them. Mrs Long-suffering smiles quietly to herself. Fluffy daughter says "when you have a cat, you must take responsibility. Getting rid of Daddy is responsibility."

So, at some point soon I may be repl meoow meow meow *finds slipper to poo in*
2 comments:
Email ThisBlogThis!Share to TwitterShare to FacebookShare to Pinterest

My name is Keith and I am a techno addict. I have been as long as I can remember. I've considered developing some emotional maturity and realise that life is about living rather than having. But then it isn't entirely the having - it's the making it all work together.

I love it. We've got a house full of it. My wife and daughter can't move due to the wiring.

Just this evening I worked out how to make my iPhone play music through my PC using bluetooth. Anyone else would have just found a bit of wire and connected the two together. That'd be too easy for me. Where would be the fun in that? I mean I can take my iPhone up to 10 meters away from my PC and still play music through it's speakers. Hell, I can be in another room so I wouldn't even have to listen to the music I was playing. Stupid thing to get happy about.

Maybe I can move onto other devices. Could I get my toaster to play Judas Priest's "Living after Midnight"? Got to be worth a go, I'd have said. To be honest, I would be satisfied just to get the thing to make bread brown on both sides evenly and quickly. It has a dial on the side marked with numbers. Number 1: Make the bread vaguely warm to the touch; Number 2: Make one side of each slice slightly brown in the middle; Number 3: Put the fire to it. Cremate. Leave no trace of the bread. Send it to the ozone layer post haste. Thankfully it cannot be turned up to 11 - I've always assumed that would have been banned under the Nuclear Non-Proliferation Treaty. Amerdinerjad says Iran has no nuclear weapons, but they've got a toaster and they know how to use it.

I had reason earlier in the day to look up Bermuda Triangle mysteries. Sadly most are terribly easy to explain, but like always it set me thinking. Where exactly did my 500g bar of Dairy Milk go? [For those of you reading from the other side of the Atlantic that is a very big bar of very nice chocolate] One day it was in the 'fridge and the next it wasn't. Obviously I took statements from all present, although the celery was remaining suspiciously quiet. I took the cheese away for interrogation.

My keen mind discounted the obvious immediately. It hadn't been eaten by the dog. Dogs don't like Dairy Milk. 500g would clearly be too much and the poor animal would have a stomach ache. Dog's can't unwrap foil wrapping and that was gone too. The absolute clincher I felt was that we don't own a dog. Well, I don't think we do.

A few days later it reappeared, but had gone past it's best-before-end date. Mysterious chilly white portal to another time and place OR a grocery delivery - you make up your own mind.
2 comments:
Email ThisBlogThis!Share to TwitterShare to FacebookShare to Pinterest

This blog is intentionally left blank