"I need to store some tools," said Roth.

"Scotland," I repeated, trying not to sound surprised. "Where in Scotland?"

"Culloden Moor, somewhere near the middle," he replied.

As was common with our conversations the next question was critical, and not to be confused with a normal conversation where it would mean something quite mundane.

When in a regular conversation would be request as to how soon, in ours it often meant which century.

"What were you planning to put said tools in? Some kind of box?"

"I was thinking maybe a shed."

"The DIY shop just down the road."

"Good choice, that'll avoid the annoying people who expect to be paid."

"That's what I thought."

"It's nicely out of the way. I hate clutter."

"Have you considered a parallel universe as well as displacing the tools in time and space?"

"There are parallel universes?"

"Which one is the furthest away?"

"That's the problem, the further away we get the less like this one it becomes. It could get dangerous. If we go too far away we'd be two pizzas talking and thinking about ordering a takeaway Indigo Roth and iDifficult this evening."

Roth checked his limbs, and suggested, "Maybe we stay in this universe."

We acquired the shed without incident, adding some burn marks to the floor and spreading some sulphur about to give the impression it was a demonic shed possession.

A four hour tea ceremony later (you can't rush a good cuppa) and we were ready to go.

Time travel requires an exchange of dimensions. There are three dimensions of space and another of time. Given the right technology, a skilful flick of the wrist and travel into the future or past is possible.

Three parachutes opened and we drifted to the ground, Roth, I and the shed. We'd exchanged quite some vertical height for some years into the past. Note to self: Need a mineshaft or a cliff for travel into the future...

We hit the ground, cleared away our 'chutes. Roth opened the door of the shed and threw the tools inside.

"Where on Earth were you keeping that scythe?" 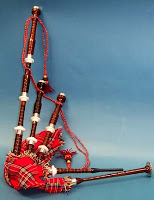 Before Roth had the chance to close the door a Scottish clansman blowing bagpipes loudly and expertly came walking over the hill and straight into the shed. Thinking quickly he slammed the door and threw the tiny little toggle lock. The piper continued to blow inside the shed, whilst hundreds of his comrades followed him over the hill.

"Have you brought the invisibility deodorant?" asked Roth.

"Yes, indeed," as I handed over the aerosol can. It was one of my least successful inventions. It didn't really deodorise or act as an antiperspirant, but by being invisible no one could see who smelled so bad.

"What date did we arrive on?"

We hid behind the shed, invisible for some hours whilst the battle raged on around us. The piper trapped in the shed blew his pipes more and more frantically, until eventually, late in the afternoon, he ran out of breath.

Darkness fell. The battle was over. Everything was quiet. We opened the door to the shed. The piper staggered out, exclaiming, "Och, scmells of socks in there." And with that wandered back over the hill he arrived from.

Roth looked at the socks lying all over the floor of the shed, carefully wrote a note and threw it into the shed.

A few moments later we were back.

"Does it feel tidier now the tools have a proper home?"

"Indeed it does. Very much so. Shall we order pizza?"

Somewhere else, very far away, a tall well-dressed pizza picked up the phone and ordered a take away human on a two for one offer.
8 comments:
Email ThisBlogThis!Share to TwitterShare to FacebookShare to Pinterest
Newer Posts Older Posts Home
Subscribe to: Posts (Atom)