Resolving to be Less Rubbish

Lets face it most new year resolutions are not kept. I've been to the future and, trust me, I've broken all of the ones I've made so far. There is just no point in getting hung up about this, what I need are not more stupid, hard to keep, challenging resolutions, but a better class of resolution.


HAPPY NEW YEAR EVERYONE
3 comments:
Email ThisBlogThis!Share to TwitterShare to FacebookShare to Pinterest

Roth and I have been on a mission to return dignity to the art of loafing.

In addition to loafing, I am a black-belt in lurking and Roth has achieved similar status in looming. He has the height on his side, although I wouldn't wish to detract from his obvious skill.

Whilst neither of us are entirely work shy, we do blush quite a bit and run away most of the time.

In his earlier work (I use the word carefully, but mostly because it only contains four letters and is hence less effort to type) In Line With My Worldview, Roth explains that he is a fractal slacker and at any level, whichever way you choose to view things, he is a raving success at doing absolutely nothing.

Having the technology at my disposal, I have become the world's first* Temporal Slacker. Throughout time, at major points in history, if you look carefully in the background I am there, doing absolutely nothing.

When the Berlin wall fell, there I was at the bottom resting up against it with my head on a pillow. Asleep.

When Stephenson's Rocket first shot down a railway track, I was there. In first class, reading the daily paper. 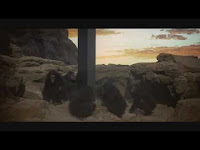 When the apes were waving sticks around at the base of a huge black obelisk, I was on the other side, leaning against it, sipping a beer and pondering why navel fluff is always purple.

You can think of me as an alternative Doctor Who, but without the heroism, the TARDIS, the assistant, the enemies or the charisma.

There are, without doubts, moments of frenetic activity in my life. Just the other day I lost the remote control down the back of the sofa. They are rare.

* Designations like world's first in time travel are rather hard to substantiate. So I haven't bothered, I've just claimed the unprovable.


iDifficult will return in the Chronicles of Nana, a tale of yellow fruit, flatpack bedroom furniture, a lion and snow, in the new year.
6 comments:
Email ThisBlogThis!Share to TwitterShare to FacebookShare to Pinterest
Newer Posts Older Posts Home
Subscribe to: Posts (Atom)