She had the kind of smouldering good looks that could burn right through a man's soul.

"I'm sorry, I must have had my glasses on up the wrong way," I paused to regain my composure. "What's up Roth?" 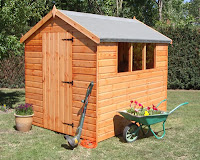 "My shed is missing."

"Well, that's true. At the moment. Are we talking about the one with your tools in, that so happens to lurk in the middle of Culloden moor, because we put it there in 1746?"

"How do you know it's missing? Did you feel a disturbance in The Fence*?"

* The Fence is the mystical force that runs through all things including sheds. My friend Roth is particularly sensitive to The Fence. There are rumours that long ago, he went by another name and fought with a laser brush, the sacred weapon of the Creosote Knights.

"These are not the tools you are looking for."

"Force of habit. I just know its not there. We need to go and look. I know it's a long way back in time but I won't rest until I know it's safe."

"Are you absolutely sure?"

"I find your lack of faith disturbing."

"You and that shed were pretty close once."

Somehow, once a blog entry, we seem to end up going back in time, crossing into a parallel universe or missing some important punctuation. I accept this now.

We rotated the dimensions. What we lost in centuries and years, we gained in yards, feet and inches above the ground. The air whistled around us and we pulled our rip cords. In a flutter of silk we descended to the ground. I would still like to know where Roth got his union jack parachute.

At ground level, it was clear that Roth's feelings were correct. The shed was missing with only a square grassless depression to show where it once had been.

I made up a plausible explanation, "It must have passed across the Shed Event Horizon," I intoned with authority. "It happens to items pushed through time."

"Won't it happen to us? We've been through time on, like, oodles of occasions."

"Or it could be demonic shed abduction," I added.

"Are you making this stuff up?"

"You were never in the scouts, were you?"

"I was. 23rd Slobbering-Under-The-Bed Scout Group. For one day."

"Is that the Scout Group that needed a helicopter rescue from a mountain in Norfolk?"

In the distance there was a glow of a camp fire, and sitting around it was a figure dressed in tartan. We walked towards the solitary figure and the welcoming warmth of the camp fire.

"Hello, do you know what happened to the hut over yonder?"

"EOLIST?!", we both exclaimed.

It was our friend from the caffeine exchange program.

"In 1985 they're going to build a coffee shop here. I wanted to get in before it got busy."
6 comments:
Email ThisBlogThis!Share to TwitterShare to FacebookShare to Pinterest
Newer Posts Older Posts Home
Subscribe to: Posts (Atom)