An Unfortunate Bullet in the Head

Your three heroes have been fed and are following a trail of notes left by a person as yet unknown, asking for help.

They have been on a bus ride driven by Death. They have sat in perfect darkness until they worked out it was an Imagination Powered Spaceship. They have traveled on a pretty good approximation of the Starship Enterprise to a red planet, whereupon they received a further message and beamed down to the surface.

It was here the story took a darker turn.

We rejoin our heroes on the surface of the planet. Indigo Roth has been shot.

"Max, I think they've shot him in the brain!", screamed Eolist. 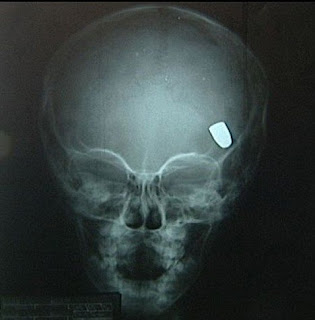 At times of stress I have a tendency to say stupid things. I didn't fail this time, "Damn, they must have been extraordinarily good shots."

"You're a doctor, do something!"

"I'm a PhD in Fabrication & Lies. I have a Master's degree in Being Useless."

"That's simply great. I was hoping you might be able to save his life using the outer casing of a ball point pen or something."

"We could stick the outer casing in that hole in his head."

"Help me drag him somewhere safe."

At that point another shot rang out and Eolist collapsed across Roth. I had but a few seconds to assess the new situation before I heard another bang, felt the pain, light-show and then darkness.

Are all our heroes dead? Will we ever find out who the note is from? What were the other horsemen doing whilst Death drove the bus?